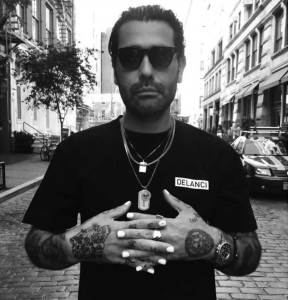 Harif Guzman, born March 23, 1975, in Venezuela, spent much of his childhood surrounded by his mother and sisters and was influenced strongly by his father (a printer and typesetter). As a little boy in 1980, Guzman came to New York City. Guzman calls New York not only home but his canvas and inspiration. The inspiration of his work derives from mechanical reproduction and a unique technique that refuses the deadening effects of iconographical conformity. Further inspiration is the result of Guzman’s earliest experiences of image making and the honest craft that he encountered working in his father’s print shop as a boy. The subsequent trajectory of his path from shop worker turned street-smart skate punk, to a worldwide, well respected contemporary artist, involves an alchemical shift as humble cast-offs evolve into fine art in his studio.

Guzman is an artist whose work inhabits and extends a tradition established in the 1920s Weimar Republic with the extemporized collage and assemblage of Kurt Schwitters, and which he continues in contemporary America via the precedence of Robert Rauschenberg, Jean-Michel Basquiat, and the early gritty Pop Art paintings of Mike Kelley. His work is about transformation. The found materials Guzman employs are not just the physical materials he works with, but also second hand imagery and ideas that characterize contemporary urban existence.