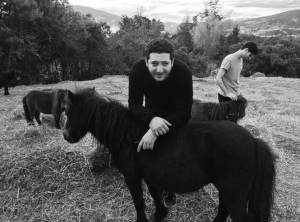 British born artist David King Reuben (b.1988) originally began painting in rebellion to his ultra orthodox Jewish upbringing. At the age of 16 he was given a video recorder and decided to shoot a documentary about the life he had missed out on by living in a secluded religious community.

“Young London” (2007) was a tale of his adventurous filming in transgender nightclubs, shadowing now world renowned graffiti artists and musicians both on tour and in their private lives. This insight into a whole new world was a pivotal moment for Reuben encouraging him to embrace life in a creative field.

Reuben had his first solo show in 2008 age 19 at Beach Blanket Babylon in London’s, Shoreditch. In 2008, Reuben moved to New York City to carry on his exploration of the young arts scene. In the next few years he has had numerous exhibitions in New York Cities famous art districts of Chelsea and Tribeca, while completing a Bachelor of Arts in Film and Video in 2014 at SVA.

Now in the forefront of modern western culture, Reuben finds overwhelming similarities between contemporary social culture and his ultra orthodox upbringing. “Dietary restrictions have changed from Kosher to Organic. Uniform, from a traditional skull cap and side locks to skinny Jeans and a slick watch. Circumcision to nose jobs and indoctrination of biblical scripture to flashing advertisements on television screens and unattainable happiness sold through billboards on every street corner.” Second time around, Instead of rejecting this new culture, Reuben says that he is more interested in exploring the reasons behind it and expressing his findings through his works.

Reuben works with multi media on canvas. His latest works are made by slicing an array of his paintings and rearranging them onto a single canvas to mimic the cosmetic surgery approach to beauty.